The ScyllaDB team is pleased to announce the release of ScyllaDB Open Source 5.1, a production-ready release of our open-source NoSQL database.

ScyllaDB will now automatically run SELECT COUNT(*) statements on all nodes and all shards in parallel, which brings a considerable speedup, even 100X in larger clusters.

This feature is limited to queries that do not use GROUP BY or filtering.

The implementation includes a new level of coordination.

A Super-Coordinator node splits aggregation queries into sub-queries, distributes them across some group of coordinators, and merges results.

Like a regular coordinator, the Super-Coordinator is a per operation function.

You can disable this feature by setting enable_parallelized_aggregation config parameter to false.

It is now possible to limit read rates and writes rates into a partition with a new WITH per_partition_rate_limit clause for the CREATE TABLE and ALTER TABLE statements. This is useful to prevent hot-partition problems when high rate reads or writes are bogus (for example, arriving from spam bots). #4703

Limits are configured separately for reads and writes. Some examples:

Limit reads only, no limit for writes:

This feature extends nodetool refresh to allow loading arbitrary sstables that do not belong to a particular node into the cluster. It loads the sstables from disk, calculates the data’s owning nodes, and automatically streams the data to the owning nodes. In particular this is useful when restoring a cluster from backup.

One can copy the sstables from the old cluster to the new nodes and trigger the load and stream process.

This can make restores and migrations much easier:

Note there is an open bug, #282 , for the Nodetool refresh --load-and-stream operation. Until it is fixed, use the REST API above.

A ghost row is an inconsistency issue which manifests itself by having rows in a materialized view which do not correspond to any base table rows. Such inconsistencies should be prevented altogether and ScyllaDB strives to avoid them, but if they happen, this statement can be used to restore a materialized view

to a fully consistent state without rebuilding it from scratch.

wHERE v IS NOT NULL

Performance: Eliminate exceptions from the read and write path

When a coordinator times out, it generates an exception which is then caught in a higher layer and converted to a protocol message. Since exceptions are slow, this can make a node that experiences timeouts become even slower. To prevent that, the coordinator write path and read path has been converted not to use exceptions for timeout cases, treating them as another kind of result value instead. Further work on the read path and on the replica reduces the cost of timeouts, so that goodput is preserved while a node is overloaded. 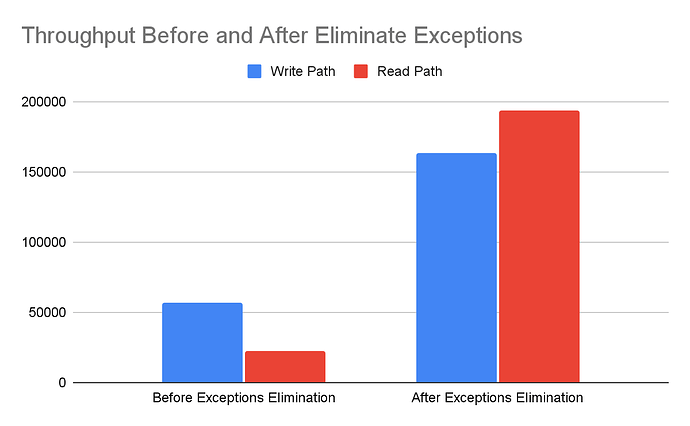 While strong consistent schema management remains experimental in 5.1, the work on the Raft consensus algorithm continues toward more use cases, such as safe topology updates, improving traceability and stability. Here are selected updates in this release:

The CQL syntax is compatible with Apache Cassandra. Examples:

A full example of using Rust to create a UDF will be shared soon.

To enable WASM UDF in ScyllaDB 5.1:

Issues fixed in this release:

More update in Part 2 below!

Updates in this Release

After this change, the following query

And the driver sending a list with null inside as the bound value, something like [1, 2, null, 4] Would result in an invalid_request_exception instead of an ugly marshaling error.

The tool can be used to list the different API functions and their parameters, and to print detailed help for each function.

Then, when invoking any function, scylla-api-cli performs basic validation on the function arguments and prints the result to the standard output. Note that json results msy be pretty-printed using commonly available command line utilities. It is recommended to use scylla-api-cli for interactive usage of the REST API over plain http tools, like curl, to prevent human errors.

It is now possible to limit, and control in real time, the bandwidth of streaming and compaction.

These and more configuration updates below:

Below are a list of monitoring and tracing related work in this release: